I am sitting in a tower suite at the Hard Rock in Las Vegas staring at Mrs. Jaxon. And, by Mrs. Jaxon, I do not mean my mother (hi, mom!). No, I mean my wife. We are here on our honeymoon. That’s right. Honeymoon. You know the amazing woman who answered my call out to the Universe? I wrote about her. Well, given that we were both hopelessly in love, I asked her to marry me a couple months ago – right about the time that my posts slowed down – and, well, she said yes. We got married last Saturday. And I couldn’t be happier.

When I have important really personal things going on, good or bad, I tend to retreat a little bit. I am sure you understand that it’s not my style to process those kinds of things here. I tend to process and then share later – once things are settled. Others do it differently, and I totally respect that. I always want to save my first thoughts, or my truest self for my family and friends. I can share with you all once those things are processed and shared in real life. So, proposal, wedding planning, and marriage are settled. And, now I can share.

OHMYGODYOUGUYS! I am married! In the coming weeks, I will share about what happened. I have lots of things to say about getting married from the Butch perspective. For example, I decided that I was neither the bride, nor the groom. Instead, I claim “Broom.” I’ll tell you how that went down next.

It’s Butch to “marry that woman already” (as one of my besties said). Be Butch.

You know that feeling when you’ve been sitting in the dark for a long time – like ages? And, you are just sitting there thinking, “Why am I sitting in the dark? Why don’t I turn on a light? Light a candle? Fire up the smartphone? Something.” But, you can’t seem to do that. You just keep sitting in the dark – for no good reason. Or maybe there is a good reason. Maybe it’s that you are stuck. Afraid. Or unaware. Right? Sometimes, you just don’t even know that you are in the dark. After all, you can’t see that it is dark if you don’t know that there is light. Ok, I get that this is a little esoteric. I’ve not written in a while and I guess I have some bottled up metaphors. Let me pull it back a bit.

I am talking about how it felt for me to go to the Butch Voices conference recently. It was the first time I went – obviously. It was like I have been sitting in the dark, kind of stuck, and unaware, and then someone turned on the light. Wow.

“But Butch,” you might be thinking, “you write about being a big butch lesbian. You know stuff. You aren’t afraid to Be Butch.” Yes, I do write about being a big butch lesbian. I fancy myself a bit of an expert, in fact. Thanks for noticing. :o) And, no I am not afraid to Be Butch. BUT, I do tend to Be Butch alone – almost all the time. All by my butch lonesome. I look around my daily life and there is nary a butch in sight – except for the rad butches on Twitter and Facebook and those following my blog. Shout out! But, y’all aren’t here in my life, not friends of mine. You could be, of course, but we don’t know each other. Not like you know your high school and college friends, your neighbors, coworkers. So, I am essentially sitting in the dark.

But, like anyone sitting in the dark, lots of insecurities and questions arise. You know, while one is sitting staring at nothing and thinking, thinking, thinking. Will I Be Butch enough? What if I am not the right kind of butch? What if the other butches don’t like me? What if I say stupid things? (Not like regular stupid things that I say all the time, but like epic stupid things.) What if I breach the unwritten butch code that all of the other butches in the world know about – except for me? Will I be run out of town by a posse of butches, never to show my face in the butch world again?  Will I be banished and never allowed to date another femme? I am telling you, my insecurities ran rampant for a bit. But then I thought, what would I say to a friend in this situation? I would say, “Why are you being such a dick? Butch up and go to that conference. What’s the worst thing that could happen?” So, I took a deep breath, and butched it up and got on the plane, and then in a car and drove to the conference. Because I really did want someone to turn on the light. I really did think it might be amazing, and I wanted to find out.

I didn’t really realize how amazing it would be to be in a room full of butches. Let me repeat… a WHOLE ROOM FULL OF BUTCHES. To look around and see butches everywhere. Older than me. Younger than me. Blacker than me. Whiter than me (I didn’t know that was possible!). Hipper than me. Not as hip as me. Smaller than me (mostly!). Smarter … you get the idea. Butches, butches everywhere! It was like a banquet. I mean, if I was into butches, I would have been drooling. As it was, I was giddy with excitement to … belong. To be a part of the crowd. To fit in. I never really fit it. I mean, I fit in with my family. With my femme. But, that’s about it. I have acceptance at work and with my friends and at the gym, etc. But I don’t fit in, not in the way that a, shall we say “more mainstream lesbian” does. I stand out everywhere I go. But at Butch Voices, I wasn’t even the only one with a Mohawk! There were other power lifters there. Other butches into femmes. Other butches who like fashion. It was like Butch Disneyland!

And, the amazing panels. The speakers. The talks. The environment was so neat. Plus, it helped me that I knew two butches from Twitter who were going. We arranged to meet IRL on the first night of the conference. Well, the three of us hit it off immediately and it was a bit of a love fest. I won’t talk more about them here, because I’ll get all sappy and shit, and they already know that I love them. But, the take away is that Butch Voices gave me those friends in real life. We had connected virtually, but the experience of meeting in person in this wonderful incubator of an environment cemented those relationships.

After Butch Voices, I know that there are lots of other butches out there. At least a handful of powerlifting, femme-loving, bowtie-wearing amazing, wonderful, strong, sexy butches are out there. And now I know a bunch of them. I even have butch friends now! And, I am proud to have participated in this group of butches. I will continue to do so, and if you are a butch, you might consider doing so as well.

It’s very butch to Be Butch around other butches. Be Butch. 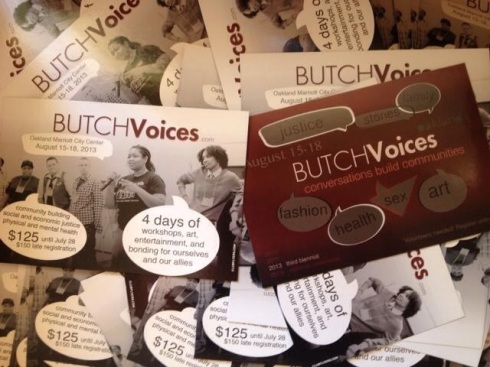 4 out of 5 dentists recommend this WordPress.com site

Nothing but the truth from now on...probably.
A Femme in NYC

A Boy and Her Dog

Traversing the Border between Butch and Transgender

Dapper- it's a state of mind.

“I’m not wandering aimlessly, I am experiencing endlessly.”

Involving an uninhibited, workaholic, independent, femme lesbian. I let it all hang out in my blog house!! ENJOY!

Pathos: It's not just for breakfast anymore

Laurie's take on moving from Nashville to Dallas

The World According to Barbara